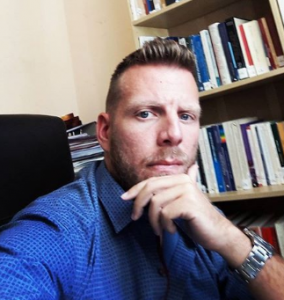 Yannis Kechagiaras is Programme & Development Manager at the Jean Monnet European Centre of Excellence of the University of Athens. He began his career as a trainee and researcher at academic institutions in Athens (Panteion University), London (European Institute of LSE) and Brussels (EU-Korea Institute of the Vrije Universiteit Brussel). In 2013-2014, he worked at the General Secretariat of the Council of the EU in Brussels, where he dealt with issues related to Eastern Europe, Russia and Central Asia (COEST Working Group) as well as to Western Balkans (COWEB).

As a project manager, he has undertaken projects funded by the European External Action Service (FPI), the European Commission’s Directorate-General for Research and Innovation (FP7 and Horizon 2020) and the European Commission’s Directorate-General for Education (Erasmus+). Yannis Kechagiaras is a graduate of the Department of International & European Studies of Panteion University. He completed his postgraduate studies in international relations with merit from the London School of Economics. He also holds a postgraduate Degree in Management (Magna cum laude) from the Vrije Universiteit Brussel. He has been a scholar of the Georgios A. Leventis Foundation (2011-2012) and has published articles on issues pertinent to Greek Foreign Policy.